Plant of the Year

Wildflower of the Year 2021: American Wisteria 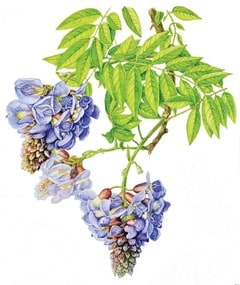 American wisteria (Wisteria frutescens) is a woody plant growing to a height of 20-40 ft. Stems climb by twining around supports in a clockwise direction. Leaves are alternate and odd-pinnately compound. Densely flowered terminal racemes appear in late spring well after the appearance of leaves and sporadically throughout the summer. Racemes range from 2-6 inches in length. 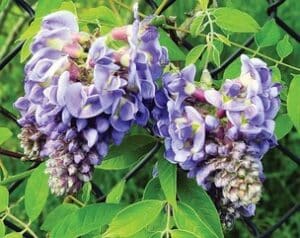 Wisteria are members of the large and diverse legume (Fabaceae) family. American Wisteria is the first species of the genus to receive a formal scientific name, Glycine frutescens, in the 1753 Species Plantarum of Linnaeus. The genus name, Wisteria, commemorates Caspar Wistar, a physician and anatomist from Philadelphia. The species portion of the scientific name, frutescens, means shrubby. There are seven or eight species classified in the genus Wisteria; two species are native to eastern North America; the remainder are from eastern Asia. 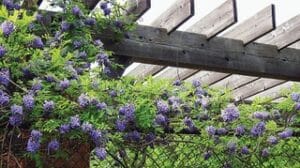 American Wisteria is easy cultivated with best results in full or nearly full sun and watered regularly during dry spells. It is hardy in USDA zones 5 through 9. It can be grown to flowering size in containers if provided with a trellis for support. Regular pruning is recommended to control long whip-like branches that develop by late summer.

American wisteria is often recommended as a native substitute for common Asian species: Chinese Wisteria, Japanese Wisteria or the spontaneous hybrid, W. x formosa, all considered to be aggressively invasive.

American wisteria can be propagated by seeds sown in fall or spring with no special pre-treatment needed or by means of softwood cuttings taken in the spring. The most readily available cultivar is ‘Amethyst Falls,” selected from a wild source and noted for its vivid lavender flowers and reliable flower production in young plants.

Numerous sources suggest eating Wisteria flowers in salads or extracting them via cold water to produce a beverage. However, caution is advised because Wisteria species contain several known toxins. Roots, bark, branches, fruits, and seeds contain triterpene-based saponins that will cause gastro-intestinal distress. Seeds also contain canavanine that, if ingested, can disrupt the synthesis of proteins, resulting in impairment of multiple life processes.

The Virginia Division of Natural Heritage gives American wisteria a conservation status of secure given its abundance throughout its geographic range. However, it is critically imperiled in Virginia where the species is at the northern edge of its range. Wild plants of American wisteria occur in scattered localities in just nine counties of southeast Virginia. 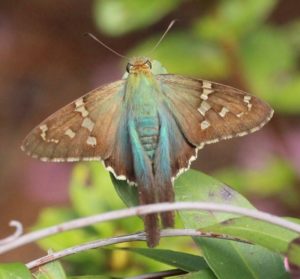