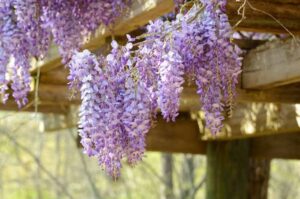 Japanese wisteria was introduced to the U.S. in 1830 from Japan. It is widely planted for its beautiful and fragrant flowers and is still very popular in the nursery trade despite its weedy and destructive habits.

Japanese wisteria is invasive in the mid-Atlantic and southeastern U.S. It prefers full sun but established vines will persist and reproduce in partial shade. It is tolerant of a variety of soil and moisture types. Infestations are commonly found along forest edges, roadsides, ditches, and rights-of-way. 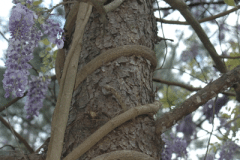 The hard woody vines twine tightly around tree trunks and branches and cut through bark, causing death by girdling. 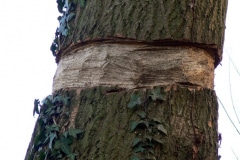 On the ground, new vines germinate from seed or sprout from roots and form dense thickets that smother and shade out native vegetation. As girdled trees die, canopy gaps are created which increases the amount of sunlight reaching the forest floor. While this may temporarily favor native species, it also stimulates vigorous growth and the further spread of wisteria and other invasive species.

If you cannot live without this plant in your garden, don’t worry! There is a native variety called American wisteria (Wisteria frutescens) that provides the same grape shaped beautiful flowers without the guilt (see companion article).

Even though this is one of the most damaging plants to our forests and open areas, nurseries, growers and gardening magazines are still promoting it. This is a recent article from a major national gardening magazine:

“Dramatic clusters of blue-violet to red-violet flowers with an intoxicating fragrance grace this vigorous twining climber. Its springtime cascading flower clusters can grow to 3 feet long or more in some cultivars. Blooms typically open first at the base and last at the tip of each cluster. Trunk diameter can reach 7 to 8 inches after 20 years, and the plant can climb to 35 or more feet in height, though its size is easily controlled by pruning.” 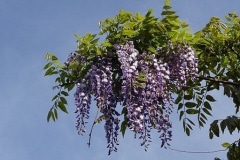 The plant description never mentions its invasive nature or the extremely beautiful alternative. It also misleads the home gardener that this plant “is easily controlled by pruning.” This vine is very difficult to control.

I have first-hand experience trying to control this vine in a local park. A small group is slowly eliminating several invasive species. The first plant that we attacked was Japanese wisteria. In some areas, the wisteria had covered the canopies of huge, mature hardwood trees, blocking sunlight to the tree. Several smaller trees had been girdled, with the wisteria vines cutting deeply into the tree bark. It’s very sad to see. We attacked the wisteria using an approach recommended by the Virginia Department of Conservation and Recreation. We haven’t won yet, but we will!